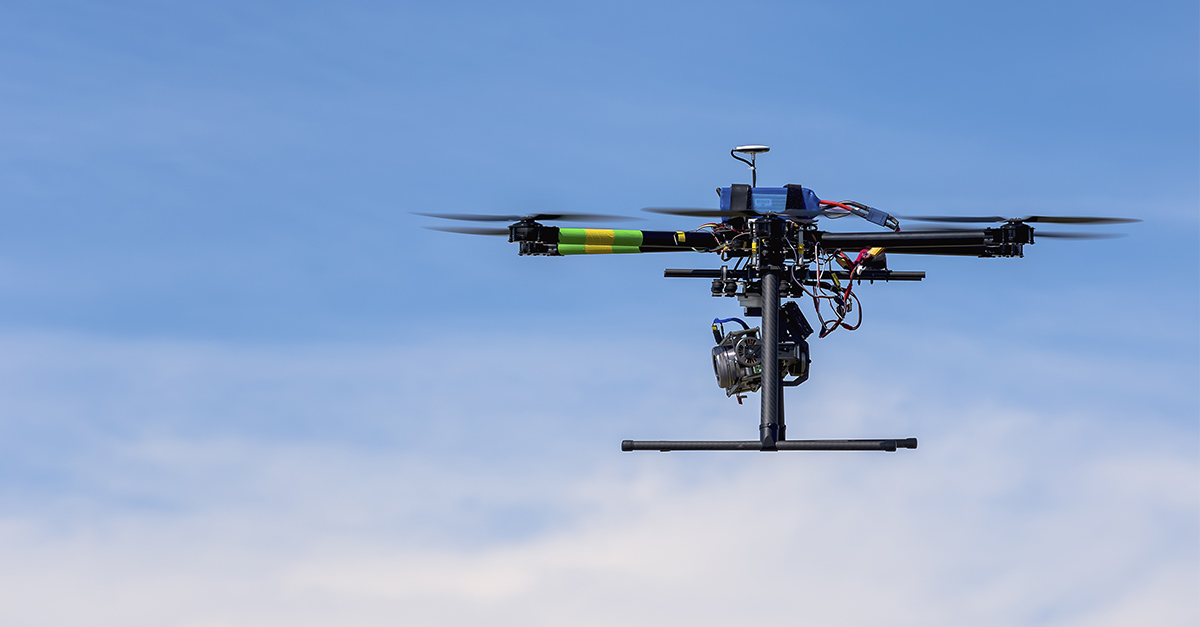 Over family dinner one night about eight months ago I proclaimed to my teenage kids and my wife that every family should have their moonshot, a ridiculously ambitious goal that smashes outside their comfort zone and careers them together into unmapped territory at really scary speeds.

In the absence of any riskier ideas, I suggested our moonshot should involve robots – flying robots. We should build an autonomous flying robot capable of travelling far beyond our line-of-sight to find a lost walker in the desert, drop him a bottle of water, and return. We should enter our robot in a competition against other flying robots, held in Queensland every two years, called the UAV Outback Challenge (OBC). All the entrants would be vying to deliver their water bottle close to the walker (his name is ‘Outback Joe’) without actually hitting him on the ‘head’ and accidentally ‘killing’ him. Everybody around the table was in.

But hang on a minute. At the most recent event in 2012 there were grass fires, entries lost, and dreams shattered when aircraft hit the ground in valiant but sadly unsuccessful attempts to rescue Outback Joe. Why would we want to embark on such folly? Couldn’t we just go on a family holiday to Wet’n’Wild instead?

There’s still a lot of work to be done, but we’ve come a long way and learned a huge amount so far. Here are the main reasons I’m glad we entered.

There are really cool technologies involved

Getting a robot to take off by itself, navigate over a number of kilometres through a narrow corridor of controlled airspace, find a human-like figure lying on the ground, send back images of the human-like figure and its location to confirm the target, drop something weighing half a kilogram on command from mission control, and navigate back to the start to land by itself, involves a dizzying array of technologies, all operating in perfect harmony:

I spend most of my time at DiUS implementing a strategy that focuses on the benefits to people of the Internet of Things, bringing together our expertise in radio-connected sensors attached to physical things with our expertise in delivering enterprise-grade web and mobile applications. Many of the technologies involved in creating an entry for the OBC are similar to the technologies required to build the Internet of Things. Attaching those sensors to autonomous robots makes it even more interesting. And at DiUS we believe there is a lot of commercial potential in the combination of flying robots and aerial sensors for precision agriculture. Solving the OBC problems gives me a lot of experience to apply to commercial problems.

My kids are in secondary school, and my wife and I are encouraging them to look at careers in science or engineering. My original intention with the OBC was to create a cool learning opportunity for the kids and teach them some interesting things that could be useful later on. That is still a great reason to do it; we now have soldering irons, a 3D printer, electronic parts, motors and propellers strewn over two rooms in the house, including all over what was once the homework table.

An unexpected thing happened though. I found that, about autonomous quadcopters, I knew relatively nothing, and I had to get across everything. All aspects of the solution: the software, the hardware, dynamics of quadcopter flight, how autopilots work, the design of frames to minimise vibration from the motors, the best material for the frame, how LiPo batteries work and how easily you can blow them up, how much current you can draw from them for how long, and a lot more. Often it’s a matter of trying to be one or two pages ahead of the rest of the family in a book with really big sections I knew little about; I’ve become the student, cramming my head pretty much non-stop for the past eight months. It’s mind-expanding, a great feeling, and far from over.

It’s probably fair to say we learn some things at school for which we have no immediate use. For example, I remember being taught in a secondary school physics class how to calculate the terminal velocity of an object in free-fall. We now have conceptual design sessions around the dinner table that use this almost-forgotten knowledge. Hooray! It’s useful after all!

It teaches us perseverance, resilience, and problem solving

Of course, not all our great ideas work the first time. Or even a couple of times after that. Sometimes they literally crash and burn. I wrestle with my preference for things to “just work”, but creating things from scratch is more difficult than that.

When I was testing the hover characteristics of our first iteration of the quadcopter at a nice safe height of a few metres, it got a dodgy reading from the GPS receiver and took off into the sky in a spectacular and heart-stopping ascent. I panicked that it might end up making a similarly spectacular hole in my neighbour’s roof, and I shut off the throttle. A quick fact about quadcopters: they can stabilise themselves really well, even from an upside-down attitude, but only when the propellers are spinning. This was a fact unfortunately lost on me as the family project was falling from the sky at 22 metres per second to end up making a crater in the back yard. It was devastating to be able to fit months of work into a shoebox after I dug the fragments from the dirt, but a big lesson from all this is we’ve got no chance of succeeding if we’re deterred by setbacks. It’s something I need to keep reminding myself.

To get somewhere, we need to collaborate

The foundation of our entry is open source software and hardware, created by a really clever community. There are two popular open-source autopilots – APM and PX4 – so for the software to operate the basic flying platform we’re spoiled for choice. The community is both active and helpful, and it’s easy to see how open collaboration can help everybody move forward much quicker than they could alone. We’ll be extending the basic platform to add in all the mission-specific functionality we need, and we’ll be contributing that back as we go, to hopefully help move someone else forward.

Like many other people, it pains me to see the decline of traditional manufacturing in Australia. We’ve recently heard plans of several manufacturers to stop operations here at some point within the next few years; labour costs are unsustainably high while far cheaper options are close by in Asia.

But as Chris Anderson argues in Makers: The New Industrial Revolution, there’s a big and growing opportunity for a different kind of manufacturer. While traditional manufacturing in Australia might diminish (e.g. Toyota, Ford, and Holden in the car industry alone), a large number of small-run niche manufacturers can fill at least some of the gap. It’s not the end of manufacturing; it’s the beginning of a new phase.

Being able to prototype physical things in your garage with affordable 3D printers and CNC milling machines is an important factor in the revolution. While previously I’d been unmoved by demonstrations of 3D printers with prints of Yoda in primary colours, for our OBC entry we’ve experienced first-hand the massively liberating effect of being able to design a part for the quadcopter, print it on the Makerbot, and be testing the new part a few hours later. The tight iterative design-build-test cycle this brings to hardware, which we’ve become accustomed to in software, has made a whopping difference to how fast we can think, build, and learn. These are skills likely to be in growing demand in Australia as we enter this new phase of manufacturing. We need to teach our kids this stuff.

It’s about using the power of drones for good

There’s a growing movement around the world to showcase the peaceful and commercial benefits of drones or UAVs. Apart from (maybe) one day delivering pizzas and books to our door, UAVs are being used in conservation of flora and fauna, bushfire monitoring and hotspot imaging, measuring air quality, and inspection of power lines.

The OBC promotes the development of UAVs to save lives. It’s a concrete example of applying robotics for social good.

Australia is uniquely positioned to be at the forefront of this movement. We have large expanses of land that can be hostile to the unprepared. We also have possibly the most UAV-friendly airspace safety laws of any country, which have allowed for the development of UAVs far more effectively than in other countries, notably the United States. Our regulations are framed to promote safety and innovation, so we should grab the opportunity to do some good.

The OBC is held at the airport at Kingaroy in south-east Queensland. Kingaroy gave the world pumpkin scones and Joe Bjelke-Petersen, so clearly it’s already a tourist magnet. To get there, although a commercial flight is obviously quicker, I doubt Virgin will let us carry-on a big, heavy quadcopter, a bunch of tools, LiPo batteries, and spare parts. So we’ll be hitting the road.

I love family road trips, and this may well be the Best Family Road Trip Ever. One thousand six hundred and fifty kilometres of it, each way. Launching our flying robot into controlled airspace from the runway of an actual airport. And we’ll still have time to drop by Wet’n’Wild on the way home. It has all the right ingredients.

There are a few ‘go / no-go’ points through the process; the organisers need to check that we understand the challenge requirements and that our design will address them, for safety reasons in particular. We’ve passed the first hurdle of a preliminary design document, submitted back in September. The next hurdle is in April, when we need to submit a more detailed design document and also a video of our vehicle taking off, dropping the water container, and landing. If the organisers are not satisfied our vehicle is safe and viable, it’s the end of the competition for us. But we’re confident of being able to get past this checkpoint and on to the next one.