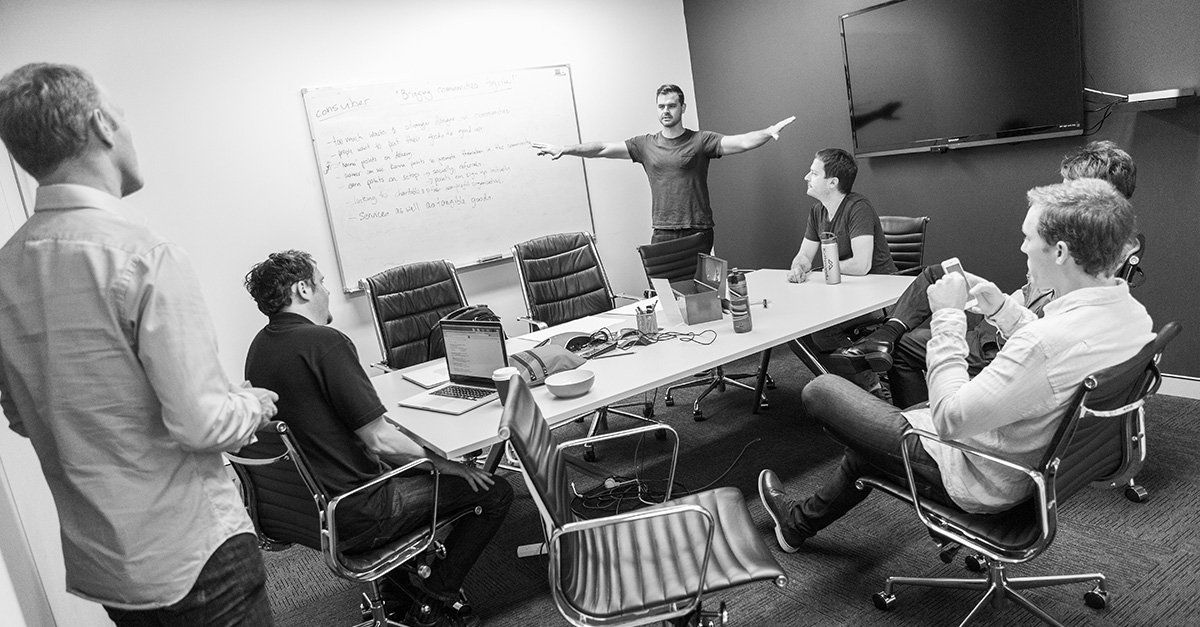 My first DiUS hack day as a committee member

It was nine in the morning and the day had kicked off, it was DiUS’ second hack day for the year, October 29th, 2015. This was to be the first hack day that I was involved in organising along with Sol from Sydney, and Tobias and Ian from Melbourne. In Sydney, 30 people comprising of User Experience consultants, developers, our sales team and iteration managers ate breakfast, chatted and waited for the hack day to officially commence. Groups started to form. You could see people forming groups in all kinds of ways. One group formed and became a vortex pulling in 15 people, another group of two was almost sheepish as it formed in a corner.

Eventually we had five groups and the Sydney DiUS hack day was underway. As I watched the proceedings, I began to wonder, why would DiUS spend its money getting consultants off site to work on projects that are at the edge of possibility?

DiUS is an organisation that is dedicated to making sure that their consultants are as effective as they can be. The life of a consultant is to be thrown, with some regularity, into new environments with new tech, and new people. Hack days allows for consultants to practice the necessary skills to be a consultant, in a place of safety.

At a hackday you have to innovative. You must work with domains you have not encountered, the tech that is just entering the market place. You also have to work with people you have not worked before. You could see this happening as the teams formed. People were figuring out how to talk about ideas, how hard to push and when to let others speak.

DiUS is interested in making their consultants the best versions of themselves. Great consultants doing great work has given DiUS a very good reputation for delivery and value. Hack days allow us to try new things and see if they can be inspired. Maybe this when a dev does some AWS work or a UXer tries their hand at user testing. Sometimes they get inspired by the people they are working with. They see the ease with which a lead developer mentors someone or how elegantly a UXer sketches out a user journey. DiUS hires great people – there’s no harm in getting them to rub shoulders with each other.

In the five projects in Sydney we had virtual reality, the business model canvas, AWS lambdas and the IoT in the mix.

This is great – New tech and new techniques. However, this is not the only thing that happens on hack day. I saw healthy interaction – pairing, mentoring and self organisation taking place. There are many ways to inspired, a hack day allows for lots of them.

DiUS by nature is distributed. You may be the sole consultant on a client site or you maybe in team of devs. What is certain is that there will be people you may not see for months at a time. The shared context of hack day allows for bonds to form. Whether your project on the hack day works does not really matter. That you talked, laughed and enjoyed the company of the other dius dev is vital. As I look out at the hack day this is what I see.

Now these look like people working on their own. Staring at their computer monitors, in their own worlds.

I see it differently, these developers are looking at a shared context, while the others devs are shaping it. There are passionate conversations happening in code, and the occasional disagreement about the visual design ( #00AA Vs #00AE). Of course there are real conversations, don’t worry, laughter and joy are present as well. Regardless of the state of a team’s project at the end of the day the important thing is that they will have a story to tell. They will have learnt something and go back to their client sites tomorrow with passion, excitement and greater sense of DiUS as a company.

DiUS consultants have the expectation to be more than just skilled. DiUS wants its consultants to be able to communicate. We need to build trust quickly which means we need to be able to build relationships and deliver rapidly. We have to understand new domains quickly and we need to able create and hold ourselves to good process. We need to know the tech landscape of now rather than two years ago. Our hack days allow for these hard to learn skills to be practiced. What the teams created isn’t as important as why we do these things. I know that the projects will be using new tech, new techniques and I will meet and talk to new DiUS developers. Hack days are about the future – the future of tech and the future of DiUS.