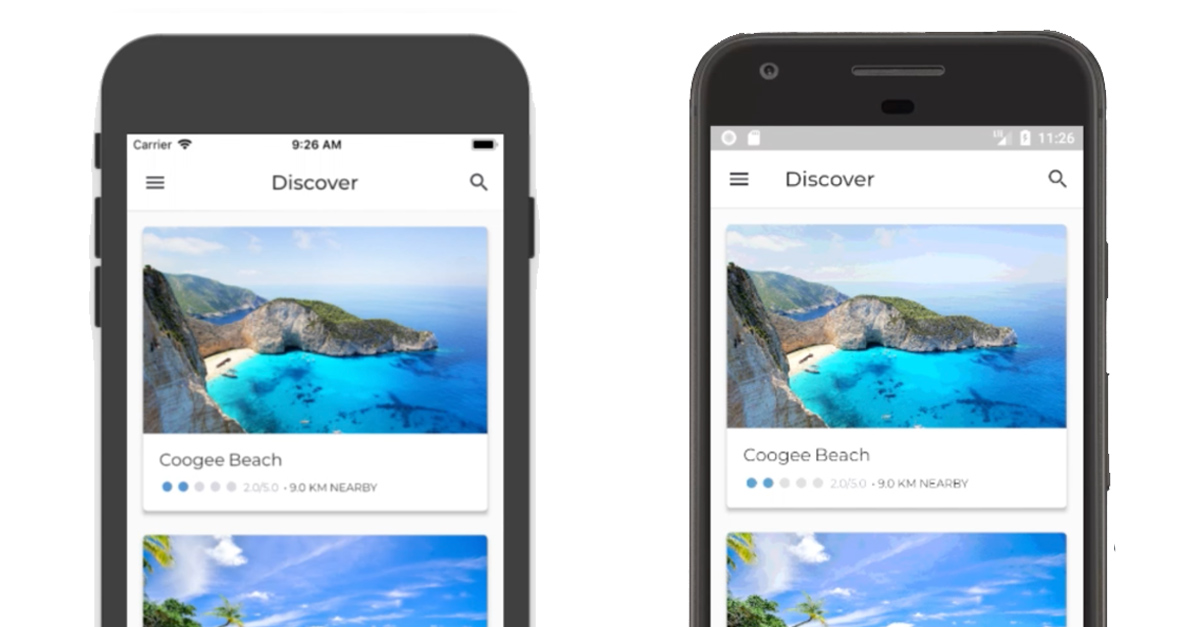 A first look at Flutter.io

When talking to clients interested in native app development, the conversation often veers toward cross-platform tools. The perceived cost savings are obviously appealing, building a single codebase, rather than multiple, to target both iOS and Android.

Although the majority of my experience in mobile has been building native iOS, I’ve also worked with cross-platform tools on several commercial apps, e.g. Apache Cordova (more commonly known as PhoneGap), RubyMotion and React Native, and for some hobby apps, with Xamarin… so as Flutter gained popularity (progressing to Release Preview), I decided to take a look at the latest cross-platform offering.

I had a long wish list and a (self-imposed) time box to see what I could learn. You’ll find the resulting app on github, which accompanies this blog post.

So, what is Flutter exactly?

Flutter is an SDK from Google for building cross-platform (native iOS and Android) apps.

You write your app in Dart, which is compiled to machine code, so unlike PhoneGap, there is no web view or as with React Native, there is no Javascript engine acting as a bridge. Flutter renders the entire UI itself into a native view, so unlike RubyMotion and (traditional) Xamarin, you won’t need to learn iOS and Android UI/API’s. Flutter apps use a reactive programming model, which will be familiar to you if you’ve worked with React.js. You declaratively construct a tree of “Widgets”, which flutter will render into a UI and update in response to state changes (e.g. from user interaction or retrieval of data from an API).

There are lots of resources out there which can guide you through building apps with flutter, some of which I’ve compiled for you here. In this post, I’d like to summarise my learnings, from spending ~48 hours building my first Flutter app.

There are many benefits to using a tool like Flutter:

The (not so) good bits

There are a few limitations to be aware of when using Flutter:

Flutter renders its own UI, it doesn’t use components provided by iOS/Android SDK’s. This has its advantages. You can for instance, be more confident in the UI rendering consistently between iOS/Android, as there is no dependency on platform code.

Having said that, a couple of limitations do arise from this:

Sometimes you need to dig into platform specifics, you will need some level of understanding and experience with both iOS and Android development, for example:

Plugins are key gap-fillers for native features that flutter can’t offer out of the box. As Flutter gains in popularity, the number of plugins will increase, however at the time of writing, the ecosystem is not as rich as you would find with alternatives, like React Native. Plugins to consume AWS resources for instance, are lacking.

Most plugins are written by 3rd parties, as with any open source dependency, the quality varies. Also, I’ve found plugins often don’t expose the full native API or do so only for one platform (the platform which the plugin author is more familiar with).

Initially I thought the learning curve for Flutter would be pretty steep, in addition to a new programming language, you need to learn a bunch of widgets (classes) and their attributes. As it turns out, I spent ~1 day getting familiar with the core concepts and Dart basics, took about ~2 days before I felt comfortable putting together a fully-functional app (understanding which widget to use takes a fair bit of trial and error).

So full disclosure, that’s the time I spent before embarking on the ~2 days building the app in this repository.

Another factor to consider is that Dart isn’t a particularly well known language, although coming from Swift, the learning curve wasn’t that bad and I would imagine the same for anyone coming from Java/Kotlin. The perception of using a specialist language however, may be off-putting to developers.

Building apps with flutter is all code, there’s no official visual tools to help you construct UI. Hot reload helps, but you’re testing against a specific device vs being able to switch between devices at design time, as you would with Storyboards (iOS), for instance.

Tooling can also be a bit buggy, e.g. hot reloading doesn’t always work, sometimes you need to stop, delete the app then re-run, to ensure clean state … basically flutter clean is your friend.

At the time of writing, flutter will work with iOS 8 and above, Android 4.1 and above. Widgets are responsive to layout changes, but Tablets are not officially supported.

Conclusion, should you use it?

Flutter really is an impressive piece of technology. Despite its limitations, I’m keen to learn more and would consider using Flutter for my next cross-platform project. Of course the answer to whether you should use Flutter is, “it depends”… but there are some scenarios where I feel it’s a bit more clear-cut: