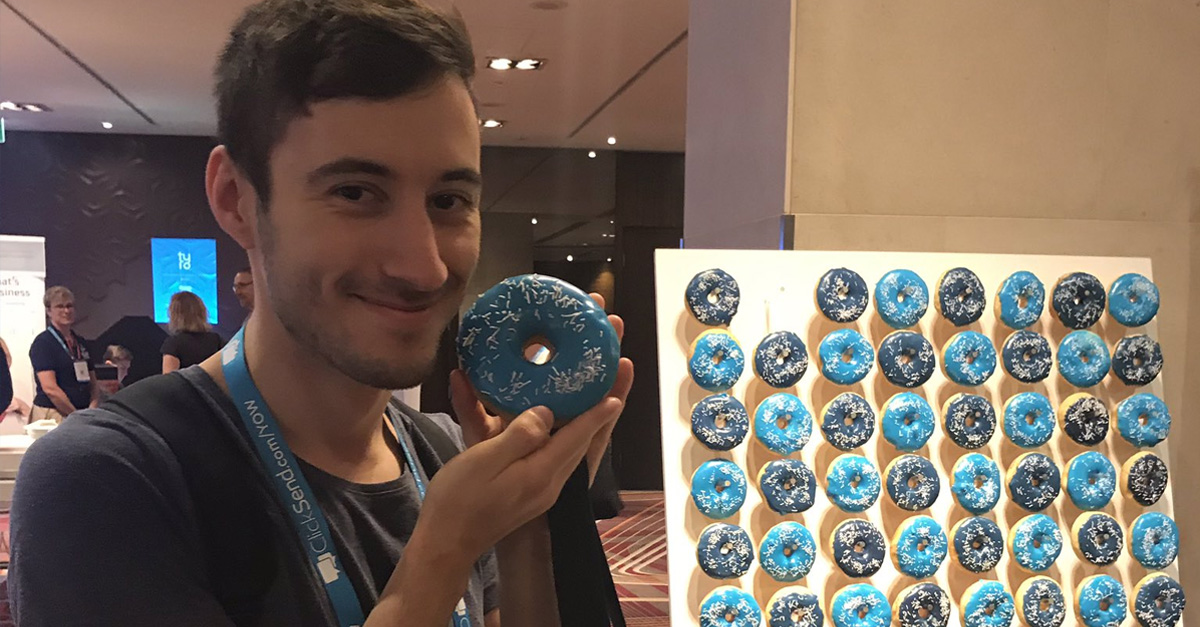 YOW! turns 10 and what I learned manning booths with Nigel Dalton from REA Group

This year marked 10 years of YOW! Conference in Australia. YOW! has a unique place in the hearts of many in the local tech community and one of those people happens to be Nigel Dalton, Chief Inventor at REA Group.

This year at YOW! Melbourne, Nigel came up with a way to showcase tech through the ages and get people thinking about the future as well as the past. There was even a quiz!

DiUS flowed on from REA at our neighbouring stand, with a demo of an Augmented Reality hack we created with them recently. The hack used object oriented tracking to recognise a moving object – in this case Nigel’s car – with the view to world domination (or maybe a marketing campaign).

DiUS’ marketing expert Penny Ivison spoke with Nigel about the history of YOW! and the local IT community. True to form, Nigel turned the tables by interviewing Penny on the scene for women in technology. Cool.

Penny: Why do you come to YOW!?

Nigel: In my view it’s pretty much the premier conference in the southern hemisphere for the tech community. You’ve got Google I/O, AWS re:Invent and there’s YOW!. At this YOW! there’s been a few talks on Back to the Future type themes. There’s Kevlin Henney, who spoke about 1968 as the last time something significant happened in the technology world; Kevlin ran through the things that were happening in 1968 and it was almost exactly the same as we’re having today, right down to the whole privacy thing. Kent Beck, inventor of extreme programming, is here; you’ve got the two ‘Dave Thomases’ who were founders in movements including Smalltalk and big players in Ruby on Rails and DevOps. You just don’t get those kind of people at typical large conferences, and it makes people feel special to be here.

The breaks are long, it’s about social networking, it’s about seeing old friends. This is the place to come and connect with your alumni, ask them what they are doing. That attracts all the best people and all we have to do is have a conversation with them.

Nigel: It is amazing to me that some people haven’t heard of us. We come as the REA Group which encompasses multiple sites and international businesses in Asia and America, which is a story we like to tell. It’s a group of companies with far more to offer than a website with photos of houses on it. My labs – REA Labs – is an REA Group asset, not a realestate.com.au asset. Our overseas product is property and lifestyle, so it’s journalism, video, banking, mortgages, and we make apps and code for all of those things. Our story at this YOW! was the history of the company and imagining what the next generation is going to be.

We built this stand deliberately to show the narrative: first there was web development, then there was mobile development, and we ask the question, ‘What is next?’ Is it Virtual Reality? And then we can leap over to the DiUS stand and experience our Augmented Reality hack. And whatever technology it is that comes next, we ask how will people upgrade their skills and knowledge?

These are such pioneering spaces. The early memories people have of YOW! and similar forums is mobile, because when we first started coming here a decade ago everyone was talking about mobile and saying ‘you need to learn mobile!’ The response from too many people was ‘no way, I’m a full stack web developer I have all the skills.’ But the reality is they have had to transition over the past decade – and they are going to have to transition again into whole new areas.

Penny: So what do you think is next?

Nigel: We think it’s AR and VR, parallel universes basically for serving customers better, as well as technology fueled by the next generation of AI with its improved ability to recognise images, recognise faces, recognise conversation. It’s going to make these tools we have today more intelligent. Wearing a dumb thing on your face and navigating with a weird hand controller is not forever – it will be voice control and using gestures, and those kinds of intuitive things.

Nigel: What do you think about the representation of women at YOW!? I loved the tweet yesterday that there was a line for the women’s toilets for the first time

Penny: Yes, gender diversity is a work in progress in the tech industry. I also work with Code Like a Girl.

Nigel: I know that

Penny: (almost falls of chair) Oh you know that, cool, I love my work helping promote girls and young women to engage and train in tech. Because it’s not one conference or one workplace’s fault that there’s not as many women to hire and send to conferences. Workplaces trying to achieve gender balance oftentimes can’t find enough trained women, which is why Code Like a Girl works from an early age to get more girls into studying STEM.

Nigel: Our CEO Tracey Fellows has a saying: ‘plant the tree that your grandchildren will sit under.’

Nigel: There is no dial that will automatically make this a 50% equitable industry, but if we all start now, in ten years the industry will be improved. I just wish I had a time machine to go back and correct some of the things people were doing in the industry all that time ago, and put forward some of the right leaders.

One of the founding brains behind YOW! was a woman called Aino Vonge Corry. She’s one of the leading engineers in the world and had a lot to do with some of the early YOW!s, which started the conference on the right foot.

At REA we’re starting to see the results of our initiatives, it’s a generational thing. We’ve been very careful with graduate recruits and getting the gender balance right. They are the noisy, fresh energetic faces of this new generation – they are here and confident and getting exposure and getting the option of changing things from within. They will be future leaders.

Penny: Exciting! Code Like a Girl is part of that change as we encourage women to be developers or to make the products. This change is so necessary.